Nearly every American citizen will work with a small engine at some point in his or her life. Whether it is a lawnmower, outboard motor or chainsaw engine, small engines are a vital part of many pieces of equipment.

However, these engines require trained specialists in order to ensure that they continue to operate effectively. These specialists are known as small engine repair technicians or mechanics, and they are a growing part of the American economy.

However, because of the wide range of designs and uses for small engines, most mechanics specialize in a single type of small engine, rather than providing repair services for all small engine types.

In general, small engines are repaired by the vendor, manufacturer or by a local shop specializing in these repairs. In some cases, a mechanic may repair a small engine appliance at the customer’s home. Finally, repairing or maintaining portable generators and other complex appliances may require a mechanic who has specialized in that area. 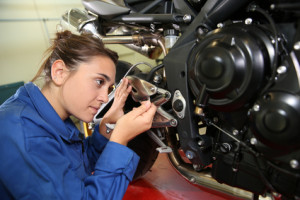 In the past, small engine emissions were not regulated by the Environmental Protection Agency. However, in 2013 the EPA published binding regulations for all gasoline-powered engines. For this reason, small engine mechanics must be prepared to deal with new engine and fuel system designs that are intended to ensure that the engine meets the EPA standards.

Current and prospective small engine mechanics should be aware that further regulation of small engine emissions is likely to occur in the future.

Small engine repair specialists currently enjoy stable employment prospects. As of 2012, the Bureau of Labor Statistics (BLS) estimated that there were over 68,000 small engine repair jobs available in the United States.

In addition, the BLS has projected a six percent increase in available jobs between 2012 and 2022. Because small engine repair careers are long-term and stable careers, this indicates that there will be a moderate but steady increase in the number of jobs available to new and current engine repair specialists.

The BLS has also determined that the annual median salary for small engine mechanics was over $32,000 in 2012. This salary will often vary depending on the local economic environment. For example, small engine mechanics working in urban regions such as Los Angeles and New York may receive a larger salary in order to compensate for the higher cost of living in the region.

In addition, many mechanics also receive generous benefits, including paid vacation time and health insurance packages for the mechanic and his or her family. The amount and type of benefits a mechanic can expect to receive depends heavily on where he or she works. Small and family owned repair shops provide fewer benefits than large repair establishments.

Many small engine repair mechanics become self-employed and start their own repair service. While involving a great deal of effort, this decision can provide the individual with unparalleled professional and personal freedom.

In addition, individuals who own their own business enjoy greater stability than individuals who are not self-employed. However, this decision is a complex one and should only be undertaken by an individual who is confident that he or she has both the experience and resources to effectively operate his or her business.

Currently, the practice of small engine repair is not specifically regulated at the federal or state level. However, anyone offering small engine repair services, especially if they own their own business, will have to comply with any local, state and federal business and tax regulations.

Although the majority of small engine mechanics who are currently working in America became proficient in this field via on-the-job training, formal training programs are becoming increasingly important as small engine technology becomes increasingly complex.

On the Job Training

One of the major advantages of on-the-job training is the fact that the trainee will be compensated for his or her work. This can be especially important for those individuals who are supporting themselves during this process. Additionally, individuals seeking to obtain training without amassing any student debt may find this an attractive path.

However, this type of hands on training has a number of disadvantages when compared to being trained via a formal program. Most notably, the mechanic may have to spend a great deal of time obtaining his or her training. Because the trainee will also have to provide other services to his or her employer, only a small fraction of the workday will be given over to training. In addition, the trainee will be dependent on the skills of his or her supervisors.

Finally, although useful if the trainee is seeking employment at the establishment where he or she is currently working, this type of training can be difficult to document to other employers. This can be especially damaging if the original employer ceases operation or otherwise becomes impossible to contact.

Finally, the field of small engine repair is a rapidly changing field. An individual who has received informal training may not be able to provide the effective service needed to maintain the most modern examples of small engine appliances. For this reason, most currently employed small engine mechanics continue their education in order to remain aware of current developments in small engine design.

On the Job Training and Large Employers

Large employers often have their own in house training systems which are far more formal than traditional on-the-job training systems. In many cases, a large employer will combine hands on training with formal class work in order to ensure that the trainee is fully prepared to assist the customer. This type of training represents a blend between on-the-job training and a formal program of education. In many cases, the employer will provide successful workers with a certificate of completion that can be used to provide proof of the employee’s competence to other employers.

Currently, there are a wide range of formal educational programs available to those individuals who wish to become small engine mechanics. In many cases, these programs are offered by community colleges, vocational institutions and some adult education programs. Many employers prefer to hire graduates from these programs because they require significantly less training before they can start contributing to the business.

Depending on the nature of the program, the student can take up to two years to complete his or her work. This is especially true for those students who are attempting to obtain an associate’s degree, as they must also complete a variety of other required courses in order to graduate.

The nature of these programs will vary according to the specific type of small engine the student is planning to work with. For example, motorcycle and marine equipment engines require more training on the part of the mechanic due to their complex nature and specific maintenance requirements. For this reason, a student should ensure that his or her program covers those subjects that are relevant to the mechanic’s future career.

Most schools award either an associate’s degree or a certificate of completion, depending on the school and the nature of the program. Most employers will accept these documents as proof of the student’s competency if the school is accredited by a professional organization. Before enrolling in any program, the student should always determine whether or not the school has been accredited by a recognized private or public agency.

Many schools offer online and distance learning programs for their students. These programs allow the student to attend via the Internet rather than having to be physically present during class.

This can be especially beneficial for those individuals who are currently working or who live inconveniently far from school. However, some online programs do require the student to be present for certain activities such as hands on training sessions and examinations.

For this reason, any student planning on entering an online program should be certain to discuss whether or not any class work will require the students to be physically present with the administration.

Combining Hands On and Formal Training

Finally, it is possible to complete a formal training program while also working at an engine repair facility and receiving hands on training. In fact, some companies may compensate the employee for the cost of his or her training. This can be especially important for those individuals seeking to improve their value to the employer or who desire to remain current with the modern state of small engine repair techniques.

Ultimately, becoming a small engine mechanic can be an excellent choice for those individuals who enjoy working with their hands and desire to enter a well-compensated profession. No matter the state they are employed in, small engine mechanics currently find their skills in great demand making this both a professionally and personally rewarding field.

The Heavy Equipment Technician – What Is It And How To Become One.

A Career As An Aircraft Mechanic

The Marine Mechanic Career In Detail