The Benefits of Becoming a Diesel Mechanic Apprentice

Becoming a diesel engine mechanic can be an excellent path to a well-paying and secure profession. One way to enter this growing field is through a diesel mechanic apprenticeship.

By doing so, not only can a prospective mechanic obtain valuable experience in the field of diesel repair and maintenance, but he or she can also create the personal connections that continue to assist the mechanic throughout his or her career.

What is an Apprenticeship 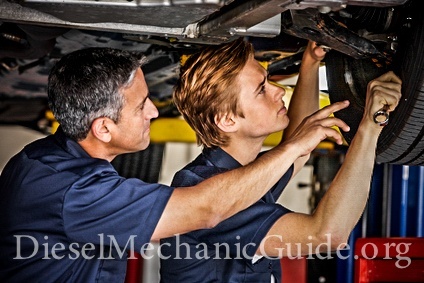 In general, an apprenticeship involves working under skilled supervisors and carrying out a variety of tasks while obtaining hands-on knowledge about a trade.

In many cases, an apprenticeship is a paid position, where the apprentice will carry out those tasks that he or she is suited for while being instructed by his or her supervisors.

As the apprentice gains experience, he or she will start to handle more complex tasks.

By the end of this period of instruction, the apprentice will be fully capable of handling all of the duties of a diesel engine mechanic.

In some cases, an apprenticeship may be called an internship. However, there are differences between the two processes. Most commonly, an internship is related to a course of formal education and often occurs before the diesel mechanic graduates from the program.

For example, internships often include a formal process of grading and evaluation. An apprenticeship usually involves a direct relationship between the apprentice and the company he or she is working with, without any educational intermediary.

Finally, most apprenticeships work under the assumption that a successful apprentice will continue working for the business after he or she has become fully qualified.

The Benefits of an Apprenticeship

In addition, an apprentice has an opportunity to learn about the culture surrounding diesel repair mechanics. By being able to experience the day-to-day work in a diesel engine repair center, the apprentice can effectively prepare himself or herself for later employment, as well as having an understanding of what the customer expects from a diesel engine mechanic.

Networking as an Apprentice

Another advantage of becoming a diesel mechanic apprentice is the opportunities it provides for personal networking.

In many cases, an apprentice can develop the personal and professional connections that can dramatically improve his or her professional opportunities.

Furthermore, because the employer will already have a good idea about the apprentice’s skills and personality, becoming an apprentice may improve the individual’s likely salary level.

There are a number of ways to become an apprentice, depending on the individual’s level of skill and the apprenticing organization. Traditionally, many diesel mechanics have become apprentices at local garages, learning their trade while carrying out other duties that they are qualified for.

In many cases, this type of arrangement requires that the individual spend some time getting to know the owner and the business before becoming an apprentice. A major advantage of working with a small garage is that the owner may not demand that the prospective apprentice have any formal education in the field of diesel engine repair and maintenance. Finally, depending on the local labor laws, it may be possible to become an apprentice before the individual is 18 years of age.

Larger companies often have a number of requirements for individual’s seeking to become an apprentice. In many cases, they will demand some level of formal education in the field of diesel engine repair, and may require that anyone seeking to become an apprentice has already graduated from a program in diesel engine maintenance. In other cases, the apprenticeship may include a mixture of work and classroom instruction and completing the apprenticeship may confer a certificate to the worker.

Finally, larger companies may have other requirements for individuals seeking to become an apprentice. For example, businesses involved in repairing commercial or construction vehicles often require that any employees working with those vehicles be licensed to drive them.

Additionally, most large businesses demand that prospective apprentices be at least 18 and have either graduated from high school or have a GED.

Why Become an Apprentice

Secondly, becoming an apprentice helps the individual develop a close personal relationship with his or her coworkers. Not only does this help the apprentice learn the trade of diesel repair, it also helps develop the professional connections that can be so important to a fruitful career.

Finally, becoming an apprentice helps the apprentice demonstrate his or her skills to the employer over a long-term period. By doing so, the employer can be confident that the apprentice will prove to be a valuable asset to the business. Many employers find this process far superior to hiring a worker that is personally unknown to them.

Ultimately, becoming an apprentice is an excellent way to enter the diesel repair and maintenance field. Whether the individual becomes an apprentice with a local family-owned garage or with a major automotive repair center, a successful apprenticeship can be a gateway to a secure and well-respected career as a diesel engine mechanic.

Top 5 Books Diesel Mechanics Should Get

The Best Way to Become a Diesel Engine Technician

Demand For Diesel Mechanics And Most Popular States